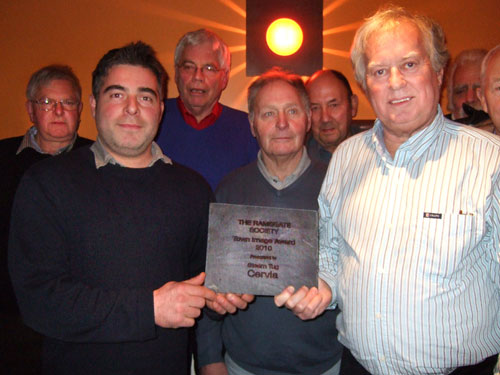 25 Jan CERVIA’s crew win an award from the Ramsgate Society!

Richard Albanese, Mike Houckham and just some the many volunteers involved in
the steam tug Cervia’s restoration, proudly showing their award.

The Ramsgate Society, a local civic and historical group dedicated to the care and improvement of historic Ramsgate, have presented an award to the volunteer restorers of steam tug Cervia.

Cervia’s many volunteers assembled to recieve the ‘Town Image Award’ just before Christmas. This award was in recognition of their hard work over the past 18 months, hard work which has already brought some considerable visual improvment to the steam tug and thereby to the whole Royal Harbour area, of which Cervia is such a well known feature.

Despite the lack of news being posted here on the Steam Museum website, much work has gone on in the background and the internal restoration aboard Cervia has continued apace over the winter. Considerable work has been done renovating the boiler room and forward accomodation areas. Further work will continue on the exterior of Cervia during the spring and summer of 2011, with bigger plans afoot that she that she can, eventually, be made fully sea worthy.

SMT trustees have been in discussions with the local authority Thanet District Council over the future of Ramsgate Maritime Museum over the last 2 years. The museum re-opened for the summer of 2009 under the control of The Steam Museum Trust, but detailed negotiations with TDC unexpectedly stalled in the autumn of that year. As a result, the museum was closed during 2010, a great loss to the town and to its many seasonal visitors. Cervia is moored alongside the closed buildings and has been open to the public, attracting good crowds during the summer. A change of direction within the local authority resulted in a resumption of talks with SMT trustees and a 25 year lease of the Clock House and dry dock has now been approved by the TDC ‘cabinet’. It is now expected that the lease will be in place during the next 1-2 months, enabling the Ramsgate Museum to re-open its doors for the coming season. Watch this space…